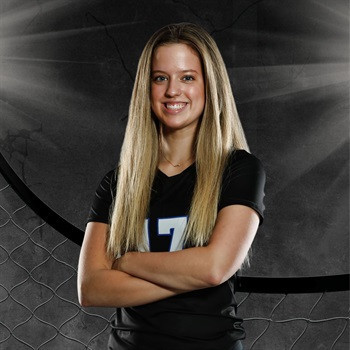 I am a senior at Chelsea High School in Chelsea, Alabama. I have played volleyball on the varsity team all 4 years and ?? years for my club team, Alabama Performance Beach Volleyball, which is based in Bessemer.

This past summer, I was fortunate to be offered an athletic scholarship from the University of North Florida (UNF). I am looking forward to spending the next chapter of my academic and athletic career at UNF in Jacksonville, Florida.

Last year, I had my initial patient experience at Andrews Sports Medicine at the recommendation of Gianna Causey, my athletic trainer at Chelsea High School. I was diagnosed with a partially torn ACL, and I was able to recover to 100% through non-surgical treatment.

In June of this year, I had my last club tournament of the season in Orlando. During a game, I landed on my opponent’s foot and sprained my ankle. I decided to continue to play and hoped it would work itself out. About 2-3 weeks after that, I was at UNF for a week-long volleyball camp. After the camp, I started experiencing a lot of pain in my ankle.

In late July, I was playing in a rec tournament for my high school team, and I stepped on my teammate’s foot with the same ankle. The pain flared back up from before. After 2 weeks, I took a break to rest my ankle.

In early September, school ball was starting back up and we were playing 2-3 games a week and a tournament every weekend. This was about 1 month in and I was experiencing bad pain in my ankle. I started experiencing aches and pains and calf cramps.

I had been doing physical therapy 2 days a week since June when the first sprain happened. At this point I didn’t know what to do. I had my athletic trainer look at it and she said it may be a stress fracture. She said I could go to the doctor now or wait until the end of the season. I wanted to wait because I wanted to finish playing and it was my senior year.

The season ended and 4 days afterwards, I was able to see Dr. Rachel Henderson at Andrews Sports Medicine’s Hoover location on Highway280. Dr. Henderson viewed the x-ray, but was unable to see exactly what the issue was, so she ordered an MRI. The MRI showed a grade 3 stress fracture at the bottom of my fibula. I have been in a boot for 4 weeks and I go back in a few days to see Dr. Henderson for a follow-up.

I would definitely recommend them! It was a smooth process and they have a great system. Dr. Henderson is great and I am thankful to her and Andrews Sports Medicine for getting me back in the game.