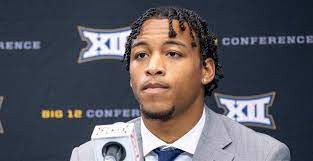 West Virginia cornerback Charles Woods had surgery on his injured left ankle, but the team is optimistic he can return to the lineup before the end of the season, sources told EerSports Thursday.

The preseason all-Big 12 pick played just 12 snaps in the season-opener against then-No. 17 Pitt before leaving the field with an ankle injury. He returned to the sideline in a walking boot, and he was sidelined and in a walking boot again for last week's game against Kansas. Head coach Neal Brown said at his weekly news conference Tuesday that Woods would not play in Saturday's 1 p.m. home game against the FCS's Towson and that the absence "definitely hurts."

"It's an opportunity for others," he said. "We do feel like we have more athleticism in that room with guys that can play."

A source said Woods traveled to Birmingham, Alabama, and Andrews Sports Medicine & Orthopaedic Center, a facility founded by famed surgeon James Andrews. A source said Woods met with Dr. Norman Waldrop, and Woods did post a photo Thursday on his social media with Waldrop. According to the center's website, Waldrop's research includes "sports-related injuries to the foot and ankle" and his surgeries frequently address "post-traumatic conditions of the foot and ankle."