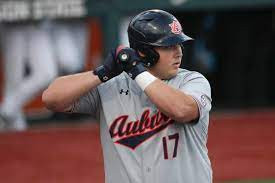 Here he is, this mountain of a man readying to step back into the box to hit. He appears meditative, breathing deeply and staring directly at his silver metal bat. The count is 2-and-2, and he’s pinwheeling his bat toward the pitcher, while the catcher is sliding to the outer half of the plate. A breaking ball is coming, and this man seems to...

After one pitch, though, Sonny stepped off the rubber and flexed his arm. He tried to throw a few more pitches, but the velocity dipped. Sonny, who knew he’d returned from the back injury too quickly but wanted to play too badly, removed himself from the game.

A trip to Dr. Jeffrey Dugas in Birmingham showed a torn ulnar collateral ligament. Dugas performed Tommy John surgery, which ended Sonny’s junior season. He returned for his senior season, hoping for nothing more than health, and fortunately for Hoover, he was able to remain on the field.

“He pitched for us in the state playoffs that year,” Moseley recalled. “And we don’t win it without him pitching some. He’s a heck of a player, man.”